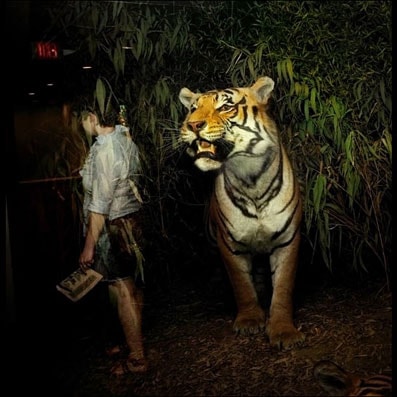 Between Shadows: Photographs by Susan Burnstine and Traer Scott 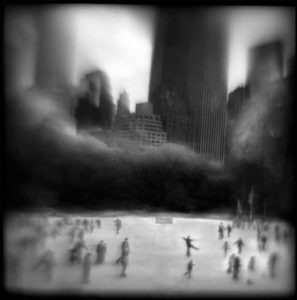 In the Midst. © Susan Burnstine. All rights reserved. 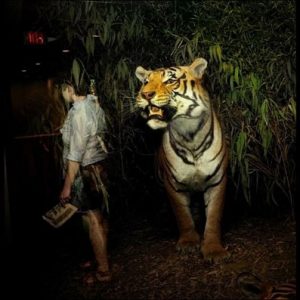 Both Susan Burnstine and Traer Scott have taken difficult emotional experiences first encountered in their childhoods and created powerful and evocative art. Perhaps this is how art is always made—looking at something, thinking of something, and then seeing under or around or through it to something else—what it means, or can mean.

Both photographers rely on more than their intuition or their knowledge of photographic techniques. For both, there is a strong element of chance. In Burnstine’s case chance operates through her use of the rudimentary plastic cameras she makes herself, with primitive viewfinders and imperfect lenses leading to challenging focus and unpredictable exposures—all of which, of course, are integral to the dreamy otherworldliness of her images. For Scott, chance brings the viewer and the viewed together for the instant that she clicks the shutter. For Burnstine, the juxtapositions are between dreams and reality—for Scott between the dead and the living. And both photographers operate brilliantly in that shadow world of reflections, whether of dreams, light, time, or memory.

Burnstine has stated that she often uses metaphors from a dream, sometimes symbols and sometimes actual elements of the dream as the starting point for an image. A path, a road or a bridge, for example, take on meanings that are often amplified by the image titles. If life is a journey, then paths, roads, and bridges are literal representations of our routes of progression, but they are also, in Burnstine’s images, freighted with metaphorical allusions to the treacherousness, seductions, and ambiguities of the journey: we can go in circles, lose our way, come up against obstacles, fail to see far enough into the distance. Scott too uses metaphor and symbol as visual strategies to create meaning in her work. If Burnstine’s work focuses on a journey with an implied destination, in Scott’s work, the journey has ended and the figures in the images are frozen at an intersection of the living and the dead. Where to go from there?

In a sense, the tension in Scott’s images of the live museum viewer and the dead figures in the diorama, both emphasize the static nature of the display and provide an ameliorative view of time and mortality. These creatures in their meticulously crafted worlds evoke our sense of wonder—one can see it in the shadowed attitudes and faces of the viewers caught in their reflections—literally and figuratively. In the tradition of Cartier-Bresson, Scott looks for that decisive moment—the instant when both the composition and its significance comes clear. There is time only for an intuitive response in such a moment. And if missed, the moment (and the image) is gone forever.

Through a glass darkly… We find in both photographers not only questions about our understanding of time and memory, imagination and reality, truth and lies, but also suggested answers. By using the photographic image—drawing with light—they reveal understandings that lie between shadows.

Brigitte Carnochan’s photographs are currently being exhibited at the Peter Fetterman Gallery in Santa Monica through August 2014. In addition to the publication of three monographs (Bella Figura, Shining Path, Floating World), Imagining Then: A Family Story, 1941-47, was published by the Center for Photographic Art in Carmel to accompany her 2012 exhibition and is available on the CPA website. In November 2014, the German Edition Galerie Vevais will launch a monograph of her images (selected by Alexander Scholz and Steven Brown) at Paris Photo.

Between Shadows: Photographs by Susan Burnstine and Traer Scott

This soft-cover, perfect bound catalog features 42 images from the August 24 – October 12, 2013 exhibition. Designed for CPA by Takigawa Design, the book also includes statements from the artists, Susan Burnstine and Traer Scott, and curator Brigitte Carnochan. It may be purchased at the CPA Gallery for $20.00, and may also be previewed and purchased from our online publisher: MagCloud.