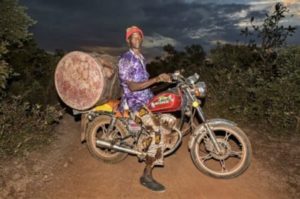 David Pace has been photographing in the small West African country of Burkina Faso since 2007. On his annual trips he lives in the village of Bereba where he actively documents many aspects of daily life including the weekly dance (Friday Night), the nightly commute (Sur La Route), local fashion (Market Day), traditional architecture (L’Ancien Village) and common occupations (At Work). Other projects include an exploration of brick making (Karaba Brick Quarry), artisanal gold mining (Les Sites d’Or) and the kiosks of Ouagadougou, the capital of Burkina Faso (Kiosks).

Even before his first foray into Africa, David Pace’s work impressed me. I had long admired his award winning photography and his characteristically humane and insightful interactions with the subjects of his portraits. David first visited the small African village of Bereba in the country of Burkina Faso in 2007 at the invitation of a colleague at Santa Clara University, to make photographs for an NGO called Friends of AfricanVillage Libraries. That led to a long-term personal project.

Since his first visit to West Africa, David has returned to Bereba for a month or more every year. Each return is a cause for celebration throughout the village. David brings back and distributes hundreds of photographs of the villagers from the previous year. These photographs become cherished possessions, for they are often the only images the villagers have of themselves and their families.

The genuine warmth and friendship between the photographer and his subject is clearly evident in David’s photographs. Many of these images are reminiscent of the respectful, unflinching portraits made by Paul Strand (most notably, his Young Boy, Gondeville, France ). They reveal a direct and powerful relationship between photographer and model.

CPA is proud to exhibit four chapters of David’s decade-long body of work. The chapters show the hard-working bodies and indomitable spirit of men lifting heavy earthen blocks carved out of the Karaba Brick Quarry, and the surreal beauty of farmers traveling home from their fields in the indigo twilight along the dirt road passing in front of David’s modest home in Sur la Route. Put on your sunglasses and experience the absolute riot of impossible colors created by the collage of bright clothing and fabrics on display during Market Day . Witness the joy of villagers dancing and celebrating long into Friday night at the end of a full week of hard work. With camera in hand, David dances in the middle of thecrowd lighting up the night with his flash.

In the grand tradition of accomplished documentary photography, these images aspire to the pinnacles of fine art. Viewed collectively, David Pace’s ten year photographic investigation offers us a rare and unique glimpse of life, work and celebration in a remote African village.