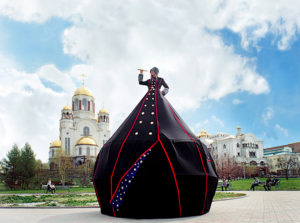 The Dress Tents project investigates desire from a female centered perspective and uses seduction as a vehicle to explore the relationship between the body and the land. Dress Tents are a fusion of architecture, the body, and the land – played out through living sculpture, moving images and still photography. The wearable architecture is installed and worn in the landscape in order to be photographed. Humor is paramount in these photographs which are meant to be alluring and whimsical. The Dress Tents question what is up, under a woman’s skirt in the 21st Century.

“The work is topically significant at this time,” says artist Robin Lasser. “The tents are nomadic, with references to the refugee situation, border crossing issues, migrations, and climate shifts. Since the work spans over seven years, the project explores social, cultural, and environmental issues that are currently in the forefront. Our work is meant to be generative and utilized as a springboard for discourse.”

Artists Robin Lasser and Adrienne Pao began collaborating on the Dress Tents project in 2004. Images from the series have appeared as exhibitions, photographs, installations and public art in the US and abroad in Argentina, China, Brazil, Canada and Russia. The Dress Tents have been featured in art, fashion, lifestyle, and pop culture magazines around the world including COLOR (International 2011); Top (Brazil 2009); Dazed and Confused (London 2008); Space (China 2008); Vision (China 2008); Amica (Bulgaria 2007); Playboy (South America 2006); and Flaunt (US 2006) among others. The Dress Tents were featured in several books including Viz Arts: Interventions; Not a Toy: Radical Figures in Architecture and Costume; and Seven Days: Sister Cities Artist Exchange.