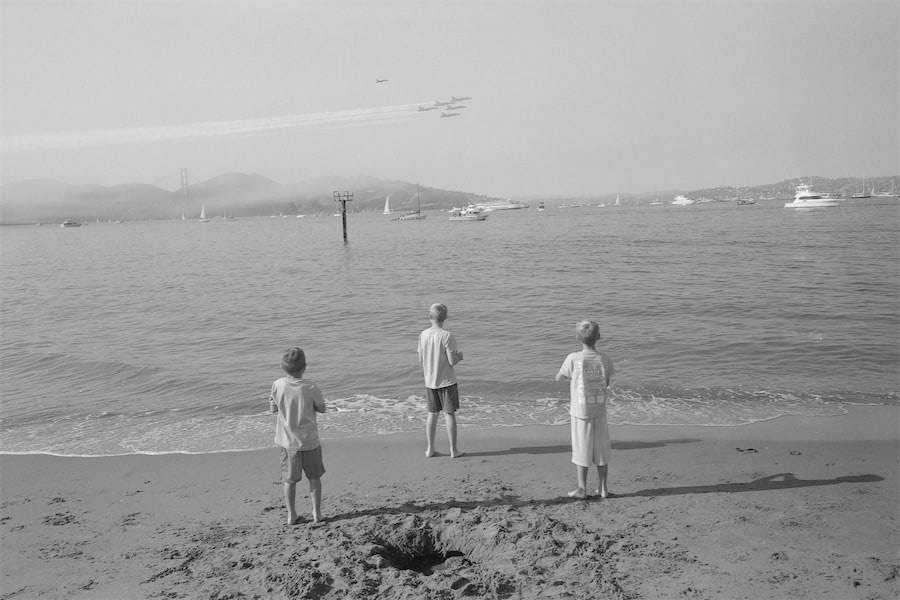 With Soft Eyes features photographs taken in California over the last six years by contemporary Bay Area–based photographers Austin Leong (b. 1990) and Adrian Martinez (b. 1990) and selected works also shot in California by the late Henry Wessel (1942–2018). Working largely with 35mm black-and-white film, Leong, Martinez, and Wessel demonstrate how photography is uniquely positioned to describe with lyricism, poignancy, and humor what is often overlooked in day-to-day life.

The exhibition’s title alludes to the way Wessel once described how he photographs in the world, with an active awareness he termed “soft eyes”: “It is a physical sensation. You are not looking for something. You are open, receptive. At some point you are in front of something that you cannot ignore.” Wessel’s understanding of and approach to the medium continues to resonate with contemporary photographers like Leong and Martinez, whose cameras are always at the ready as they mindfully observe their surroundings.

Just as Wessel documented cultural signifiers distinct to his time—lone phone booths, roadside advertising signs, and era-specific design—Leong and Martinez capture ubiquitous cellphones, mask-clad faces, and graffiti punctuating the urban landscape. Even so, a timelessness pervades many of the pictures—a sense that the people, places, or scenes depicted transcend the singularity of their moment. They exemplify how paying close attention and being responsive to the world as it is unfolding can reveal the unexpected in the seemingly mundane.

A grouping of photographs from Wessel’s iconic body of work California and the West anchors the exhibition. These photographs provide a formal, aesthetic, and conceptual framework against which to consider how Leong and Martinez operate within this lineage while extending its visual vocabulary into the present. The shared sensibilities among the three reverberate throughout the show, perhaps most clearly when their photographs are side by side, as in the center of the gallery space. But even when viewed separately, the connective threads are unmistakable.

ABOUT AUSTIN LEONG
Austin Leong relocated to his father’s hometown of San Francisco at the age of 23 after growing up in Anaheim. He credits skateboarding as the community in which he began looking closely at his surroundings and where his passion for photography first took shape. Leong’s work has been featured and reviewed in The Atlantic, Monthly Photo, Open Space, and the San Francisco Examiner. It has been included in numerous exhibitions throughout the Bay Area, including Looking Forward: Ten Years of Pier 24 Photography, which is on view at Pier 24 Photography, San Francisco, through May 2023. Austin also codirects Book and Job Gallery, a photographer-run studio, darkroom, and gallery space in San Francisco’s Tenderloin neighborhood.

ABOUT ADRIAN MARTINEZ
Born and raised in Los Angeles, Adrian Martinez relocated to the Bay Area in 2008 to attend the University of San Francisco and begin developing his practice in earnest. A self-taught photographer, Martinez draws inspiration from the Bay Area’s rich photographic history and present-day community of practitioners. His work has been featured in Open Space and the British Journal of Photography, and exhibited in various group shows. In 2016 he founded illetante books, an independent publishing imprint, as a vehicle through which to collaborate with local artists and colleagues. Examples of his publishing work were included in the 2019 exhibition Printed Publics: Contemporary Art and Design Publishing in the Bay Area at the San Francisco Museum of Modern Art. Martinez also codirects Book and Job Gallery, a photographer-run studio, darkroom, and gallery space in San Francisco’s Tenderloin neighborhood.

ABOUT HENRY WESSEL
Henry Wessel was born in 1942 and raised in Ridgefield Park, New Jersey. Over the course of his career, he received two Guggenheim Fellowships and three grants from the National Endowment for the Arts. His work was the subject of a retrospective at the San Francisco Museum of Art in 2007 and is in the collections of museums worldwide, including the Museum of Modern Art, New York; Tate, London; the National Gallery of Canada, Ottawa; and the Tokyo Metropolitan Museum of Photography. His published monographs include Incidents (2013), Waikiki (2011), and a five-volume box set (2005) devoted to his now-iconic bodies of work. For more than forty years, Wessel taught in the photography department at the San Francisco Art Institute. From the early 1970s until his passing in 2018, he lived and worked in Point Richmond, California.