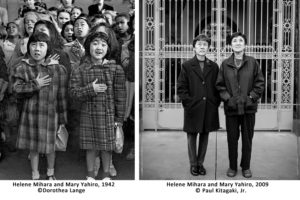 Legacy of an Enduring Spirit: Triumphing Over Adversity, Japanese American WW II Incarcerations Then and Now

Please join us for a fascinating evening as Paul discusses the creation of his compelling and extremely timely body of work, Legacy of an Enduring Spirit: Triumphing Over Adversity, Japanese American WW II Incarcerations Then and Now.

Since 2005, Northern California photojournalist, Paul Kitagaki Jr., has reviewed over 900 photographs at the National Archives, taken by War Relocation Authority photographers of the 1942 internment of 120,000 Japanese American citizens. From fragmentary captions he has identified more than 50 subjects — including an image of his father’s family at a relocation center created by one of his professional heroes, Dorothea Lange. From these images, Paul has persuaded these survivors and their descendants to sit for his camera in settings related to their internment. Kitagaki states that these paired “then and now” images, “strive to create contemporary images that complement and mirror the original photographs of Lange and her counterparts and reveal the strength and perseverance of my subjects.”

Born in Berkeley and raised in the San Francisco Bay Area, Paul Kitagaki Jr. has been a senior photographer at The Sacramento Bee since 2003. During his career as a photojournalist and documentary photographer he has covered local, national and international events from Vietnam to Iraq and seven Olympic Games.

Throughout his career Paul has garnered numerous awards, including sharing in the Pulitzer Prize for coverage of the 1990 Loma Prieta earthquake. He has received many awards from noted institutions such as Pictures of the Year International and the National Press Photographers Association Best of Photojournalism. He has taught at the Angkor Photo Festival in Cambodia, the Adidas Kuala Lumpur Collaboration Summit, and has lectured at the San Francisco Art Institute, Photo Alliance and at Brooks Institute. He is associated with the news photo agency ZUMA Press and Corbis Images.

Currently, Paul’s ongoing project on the Japanese internment camps has been on exhibit since April 2012. Gambatte! Legacy of an Enduring Spirit: Triumphing Over Adversity Japanese American WWII Incarceration Reflections Then and Now is a national traveling exhibition.