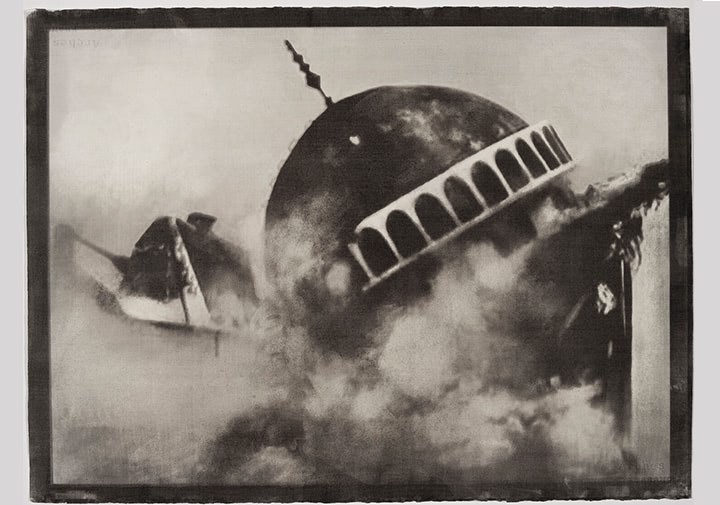 “It is evident . . . that terrorist organizations, alongside transnational corporate interests, are one of the more vigilantly opportunistic exploiters of ‘events, spasms, ructions that don’t look like art and don’t count as art but are somehow electric, energy nodes, attractors, transmitters, conductors of new thinking, new subjectivity and action.’”
—Seth Price from Dispersion, 2002

Justyna Badach’s work examines the transmutation of history and repackaging of violence through appropriation and recontextualization of images derived from films. Her latest projects, Land of Epic Battles and Proxy War are comprised of large-scale prints made using gunpowder. The images depict scenes culled from the online archives of ISIS recruitment data streams as well as American and Russian military internet propaganda, released as part of the ongoing war in the Middle East.

Land of Epic Battles (2015-2018) focuses on the violent world of ISIS recruitment videos that grew out of these socio-economic, technological, and cultural shifts that are occurring on a global level. Disseminated via YouTube, as well as through private, encrypted internet subscription channels, ISIS data streams are endemic of the larger proliferation of computer files and digital “info-war” visuals that are provided on demand and watched by choice, negating concerns about legality and morality that have traditionally defined mass-media content. Similarly, Proxy War (2018-present) examines the parallel world of Russian and US military internet propaganda that grew out of “the war on terror” and seeks to glorify military operations taking place across the Islamic world. As these two adversarial nations compete to maintain their sphere of influence in the region, they, like ISIS, employ the pervasive glorification of violence and wanton destruction as a tool to motivate their “followers”.

In Land of Epic Battles, the title for each image is taken from the ISIS video episode in which the image appeared, drawing our attention back to the horrific acts disseminated by these streams. These titles, such as The Necks Cutting; Crush Your Enemies; or My Revenge, lend context and form to what at first glance may seem like a series of random objects and sites. An image that resembles a graphite drawing of an empty truck in the desert or a helicopter hovering in a cloud-filled sky is indeed innocuous, until we’re told that the context is ISIS-produced media and that the print itself is made of explosives. The appropriation of language is also an important to the understanding of Proxy War, which take their image titles directly from language used during US and Russian press conferences on the war in Syria, Iraq and Afghanistan.

Land of Epic Battles and Proxy War become the means through which we witness the pernicious forces at play in contemporary internet war media that employs the sophisticated tools and visual vocabulary of virtual reality games, reality TV, and DIY videos. Employing and subverting methods commonly used in the entertainment industry, ISIS and the military create media that feeds on viewers’ addiction to social media, exploits the voyeuristic lure of reality TV, and nourishes their audience’s desire to watch what is socially taboo.

One of most striking features of the ISIS DIY “video streams” is their slick production strategies, and like the military messaging, their ability to continuously morph their distribution channels in order to avoid attempts at image suppression or origin verification. It is clear that our collective experience is becoming increasingly fragmented and the reality of global vents is being defined and shaped by surreptitious media producers and algo-rhythms designed to get as close as possible to viewers. As such, Land of Epic Battles and Proxy War registers the initial signs of a larger impending seismic shift that will inevitably alter our future collective experience and understanding of conflict and war.

Bio
Badach arrived in the US as a refugee in 1980. She received her MFA from the Cranbrook Academy of Art and currently resides in Philadelphia, where she is an artist, educator, and museum professional. Her work has been exhibited extensively throughout the United States and abroad. Solo exhibitions include: Light Work Syracuse, White Columns New York, Gallery 339 Philadelphia, Blue Sky Gallery in Portland and Contemporary Art Center in Las Vegas. Badach’s images have been included in over 30 group exhibitions, most notably at the Michener Museum, Rick Wester Gallery, Catherine Edelman Gallery and the Australian Center for Photography. Her work has been reviewed extensively and images have been featured in Wired Magazine, Contact Sheet, F-Stop Magazine, Dummy Magazine and several exhibition catalogs. Badach’s work is the permanent collections of Portland Art Museum, Museet for Fotokunst Brandts, Odense, Denmark, Center for Photography Woodstock, Cranbrook Museum of Art, Rice University Library, Houston, TX, Temple University, Philadelphia, PA and Haverford College. She has been awarded an artist residency from Light Work, and grants from the Pennsylvania Council on the Arts, Leeway Foundation and The Independence Foundation.