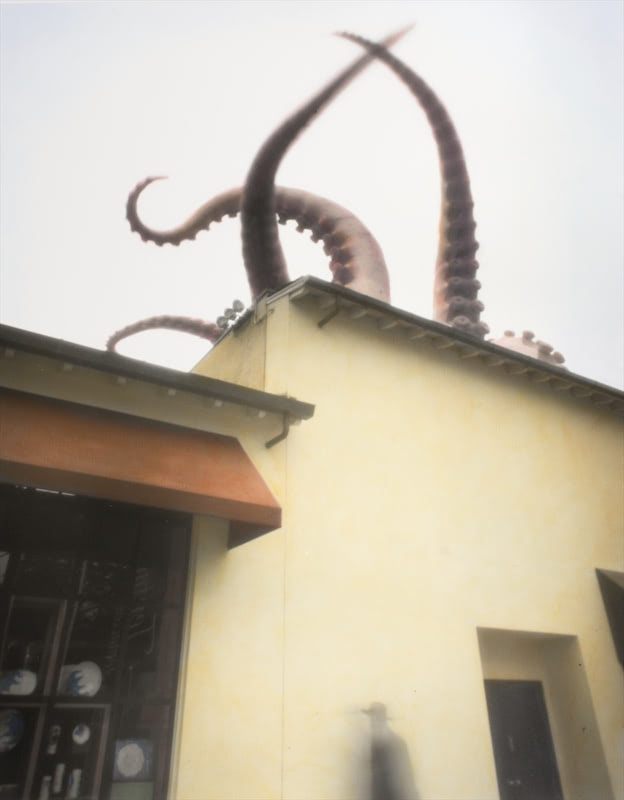 This image is from a series called “Explorations Along an Urban Coastline.”

Pinhole imagery causes one to see things in new ways, or at least to look twice. I wander with my 4 x 5  box camera through Hopkins Marine Station, the Monterey Bay Aquarium,  along Cannery Row and Fisherman’s Wharf to portray our teeming coastal life.  Instead of rocks, trees and waves, I photograph gumball machines and restaurant tables.  “Wildlife” consists of specimens in jars, lobsters on ice, neon Mickey Mice,  mackerel in a bucket, “George’s Birds,” and, of course, the Tourists.

So, after living on the central coast nearly my whole adult life, I am finally dealing with a “sense of place,” albeit my own idiosyncratic, some might say skewed one.

MARTHA CASANAVE  graduated from the Monterey Institute of International Studies with a degree in Russian Language and Literature and began her working life as a translator in Washington, DC.  She engaged in photography from early childhood, however, and later came back to the Monterey Peninsula, built up a portrait clientele, and began teaching photography, while continuing to pursue her personal work. She has  been an exhibiting and working photographer and educator  on the Monterey Peninsula for over thirty years

Every year between 1984 and 1995, Casanave used her knowledge of Russian language and culture  to take groups of American photographers to the Soviet Union/Russia,  and made a number of trips on her own to work on photographic projects.  She received travel grants from the Polaroid Corporation to make a series of pinhole photographs of Leningrad in winter.

She was awarded the Imogen Cunningham Photography Award for her portraiture (1979) and  also was a 1989 recipient of the Koret Israel Prize.  Her book Past Lives– Photographs  by Martha Casanave was published by Godine in 1991.  Her second book,  Beware of Dog,   was released by the Center for Photographic Art in 2002.   Her book (exclusively pinhole) called Explorations Along an Imaginary Coastline, was published by Hudson Hills  Press in 2006. Trajectories: A Half Century of Portraits (Image Continuum Press) came out in 2013.

Casanave’s photographs are included in many major collections, such as  the Boston Museum of Fine Arts, the Art Institute of Chicago, the Stanford Museum, the Bibliotheque Nationale, the J. Paul Getty Museum , and the Graham Nash private collection.

Casanave has been teaching photography at Cabrillo College and Monterey Peninsula College for the past 27 years.  She also teaches workshops and Master Classes nationally and internationally.