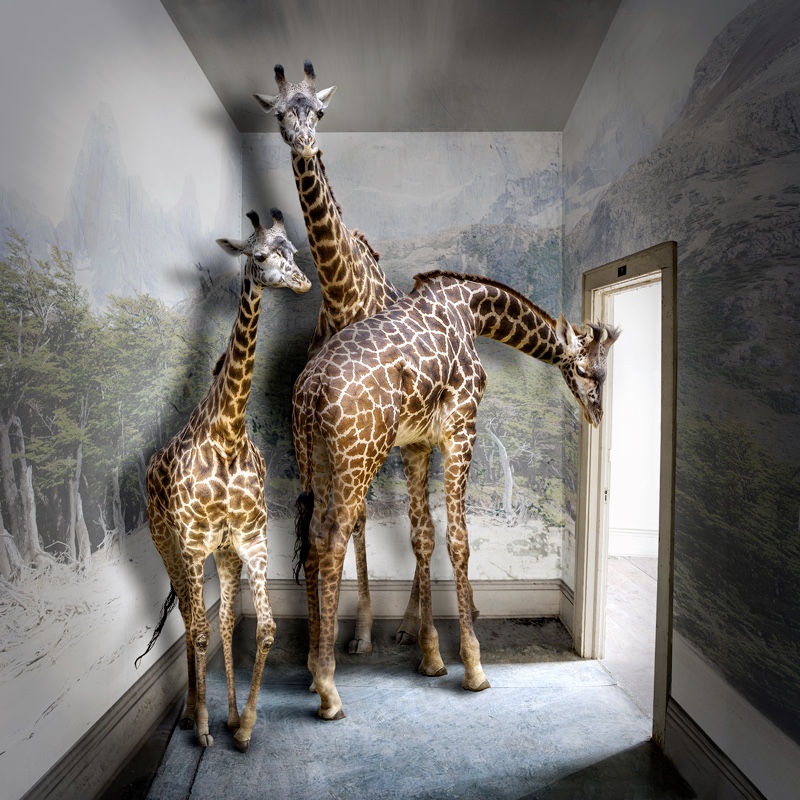 Dominion:
Portraits of Animals in Captivity

Like many people, I grew up with a fascination for animals. Storybooks, cartoons, puppet shows; our culture fosters the whimsical fantasy that animals are our friends. The truth is much darker. Animals are commodities that we use for food, clothing, labor, and entertainment. The Old Testament gave man a pretext for using animals to suit his needs. Modern civilization developed in ways to shield us from the cruelty and neglect with which we treat our fellow creatures. Today, attitudes are changing, due in large part to the long campaign of animal welfare groups that have worked to expose and question our exploitation of animals.

In each of my images, an animal has been removed from its natural environment and placed in a human space where it does not belong. The longing to be elsewhere is clear from the animal’s confinement and expression. Faded murals allude to a history of domestication and the way we can often fool ourselves into thinking of animals as extensions of our own needs and emotions. These animals are not at home here. Nonetheless, there is a disturbing beauty in their isolation.

Carol Erb was born and raised in the Midwest. She attended the School of the Art Institute of Chicago and received a BA from DePaul University. Erb’s images have been exhibited at the Center for Fine Art Photography, the Phoenix Art Museum, the Houston Center for Photography, and several other institutions in the U.S., Japan, China, and the Netherlands. Her work was selected for the 2017 Critical Mass Top 50. In 2016, she was a finalist for Critical Mass and was accepted to Review Santa Fe. Her work has been featured in several publications including Shadow & Light, Square Magazine, Adore Noir, and Adobe Create. Carol currently resides is Los Angeles, California.