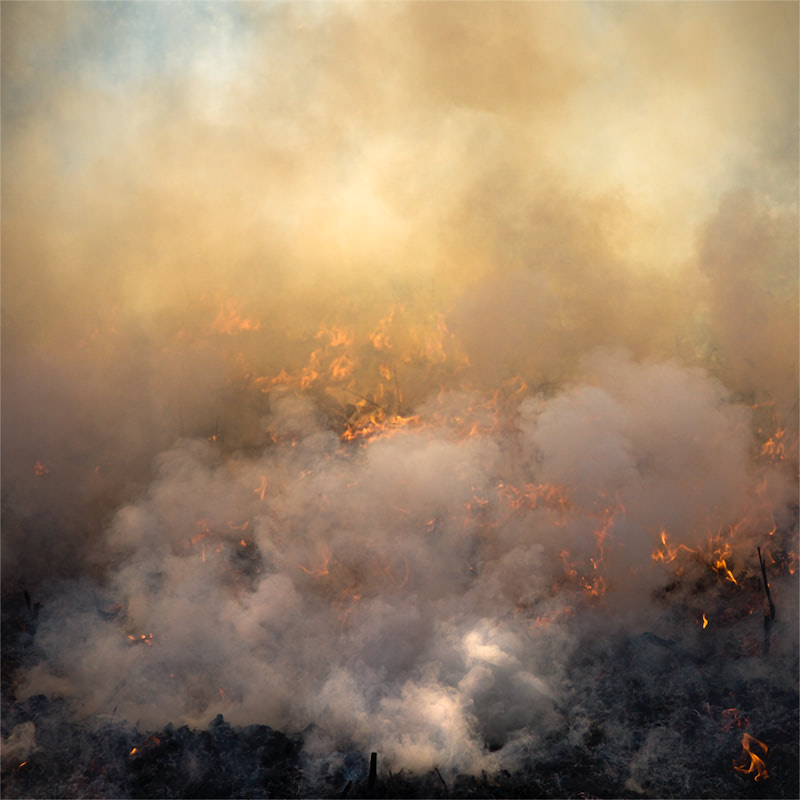 The Burn
This photograph is part of a series I began in 2007 when I observed my first controlled prairie burn. I was immediately struck by the burn’s visual and expressive potential, as well as the way it evoked themes that are at the core of my photographic work. A controlled burn is deliberately set; its violent, destructive force reduces invasive vegetation so that native plants can continue to prosper. The elements of the burn—the mysterious luminosity, the smoke that both obscures and reveals—suggest a liminal space, a zone of ambiguity where destruction merges with renewal. These images of regenerative destruction have a personal significance—I photographed my first burn at the same time my sister began a course of chemotherapy—yet they constitute a universal metaphor: the moment when life and death are not contradictory but are perceived as a single process to be embraced as a whole.

Bio
Jane Fulton Alt is an American photographer who explores universal issues of the human condition and the non-material world. Alt began exploring the visual arts while pursuing a career as a clinical social worker. She has authored two books; Look and Leave: Photographs and Stories of New Orleans’s Lower Ninth Ward (The Center for American Places at Columbia College Chicago, 2009), and The Burn (Keher Verlag, 2013). The Crude Awakening portfolio was printed worldwide in multiple publications after the BP oil spill in 2010. Alt is a three time winner of Photolucida’s Critical Mass for her Katrina and Burn portfolios. She is the recipient of many awards and artist residencies. Her work has been exhibited nationally and internationally and can be found in many permanent collections. She is represented by Corden Potts Gallery in San Francisco, California; Sous Les Etoiles Gallery in New York City; and Soren Christensen Gallery in New Orleans and Walker Fine Art in Denver. She currently splits her time living and working in Chicago and New Orleans.