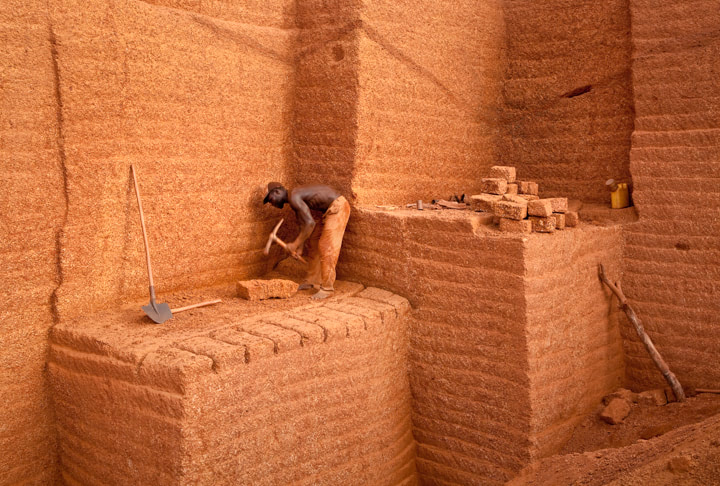 The Karaba brick quarry is located in the southwest corner of the small landlocked West African country of Burkina Faso. As you approach the quarry the dazzling color is the first thing you notice. In the golden light of the afternoon sun the multiple facets of the quarry emit a reddish-orange glow that suffuses the entire area. The scale of the place is immense. All of the lines and patterns etched into the towering walls are the product of human hands using only picks and shovels. Decades of labor have produced the tectonic designs that distinguish the quarry. This deep pit with its corners, angles, and towers is the result of carving and cutting bricks from solid stone, creating what might be seen as the opposite of architecture. The bricks produced here are used to construct houses and walls in the nearby villages. The quarry is forever expanding and changing. From year to year formations emerge and disappear, like a never-ending earth-art installation that continues to surprise and fascinate.

This image was exhibited at the 2019 Venice Biennale.

David Pace is a Bay Area photographer, filmmaker and curator. He received his MFA from San Jose State University in 1991. Pace has taught photography at San Jose State University, San Francisco State University and Santa Clara University, where he served as Resident Director of SCU’s study abroad program in West Africa from 2009 – 2013. He photographed in the small sub-Saharan country of Burkina Faso in West Africa from 2007-2016 documenting daily life in Bereba, a remote village without electricity or running water. His African photographs of the Karaba Brick Quarry were exhibited in the 2019 Venice Biennale in a group show entitled “Personal Structures.”

Pace’s images of rural West Africa have been exhibited internationally and have been featured in The New Yorker, The Financial Times of London, National Geographic, NPR’s The Picture Show, Slate Magazine, The Huffington Post, Wired, Verve, Feature Shoot, PDN and Lensculture among others. A monograph of his project Sur La Route was published by Blue Sky Books in the fall of 2014, and an exhibition catalog was published in 2016 by the Center for Photographic Art in Carmel, CA. His collaboration with Stephen Wirtz, Images In Transition, was published in 2019 by Schilt Publishing of Amsterdam. His work is in the collections of the San Jose Museum of Art; the Portland Museum in Portland, OR; the Crocker Museum in Sacramento, CA; the Triton Museum in Santa Clara, CA; the de Saisset Museum at Santa Clara University; the Microsoft Collection and Museum Villa Haiss in Zell, Germany. Pace received the 2011 Work-In-Process Prize from the Center for Documentary Studies at Duke University and was a finalist for the 2015 Gardner Fellowship in Photography at Harvard University. He is represented by Wirtz Art (formerly the Stephen Wirtz Gallery).

Pace has been a member of the Board of Directors of the San Jose Institute of Contemporary Art for 24 years. He is currently the chair of the Curatorial Committee. He is a member of the Acquisition Committee of the San Jose Museum of Art, and the Photography Advisory Board of Foothill College. He previously served as President of the Board of Directors of San Francisco Camerawork.