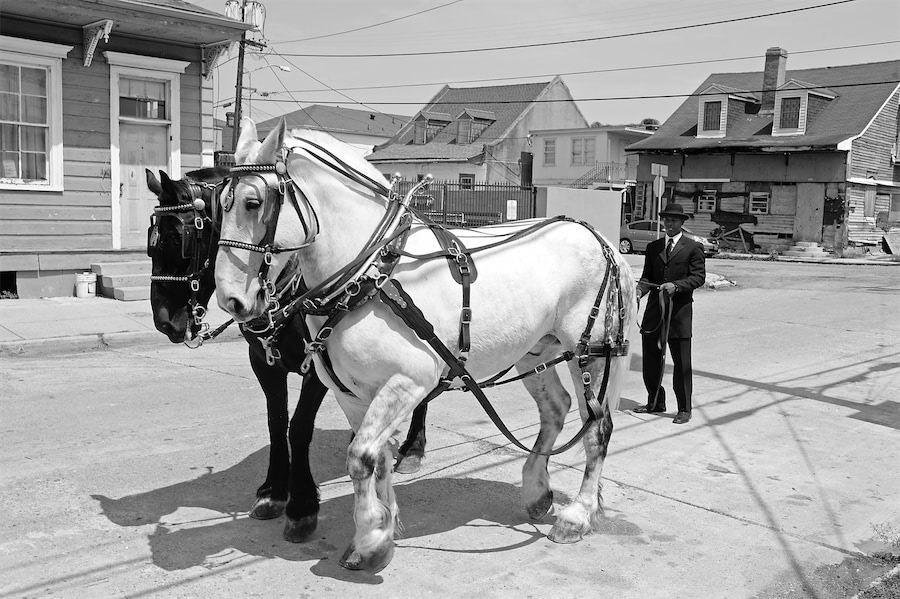 Artist statement
This image is from the book New Orleans Suite, by Eric Porter and Lewis Watts. New Orleans Suite presents a window into the landscape of life in New Orleans before and after Hurricane Katrina. Watts’ vivid black and white photographs expose the contrast of devastation and humanity in a rich sector of American jazz culture and this iconic city. Watts and Porter join the post-Katrina conversation about New Orleans and its changing cultural scene. Using both visual evidence and the written word, they pay homage to the city, its region, and its residents, by mapping recent and often contradictory social and cultural transformations, and seeking to counter inadequate and often pejorative accounts of the people and place that give New Orleans its soul. Focusing for the most part on the city’s African American community, New Orleans Suite is a story about people: how bad things have happened to them in the long and short run, how they have persevered by drawing upon and transforming their cultural practices, and what they can teach us about citizenship, politics, and society.
Bio

Lewis Watts is a photographer, archivist/curator and Professor Emeritus of Art at UC Santa Cruz. His research and artwork broadly centers around the “cultural landscape” primarily in communities in the African diaspora. He is the author of Harlem of the West: The San Francisco Fillmore Jazz Era, published by Chronicle Books in 2006, with a new edition published by Heyday Books in 2020. I think you’re still on a book tour, right Lew, that got interrupted by the pandemic. Lew is also the author of New Orleans Suite: Music and Culture in Transition, UC Press 2013, and Portraits, Edition One Books, 2019. His work is included in many collections worldwide and has been exhibited nationally and internationally including at Autograph London, The San Francisco Museum of Modern Art, the Citè de La Musique, Paris, The Ogden Museum of Southern Art, New Orleans, The Oakland Museum of California, The Neuberger Museum of Art, Purchase NY, The Amistad Center for Art and Culture, Hartford, Conn, Light Work, Syracuse NY, The Paul Sack Collection, San Francisco, amongst others.